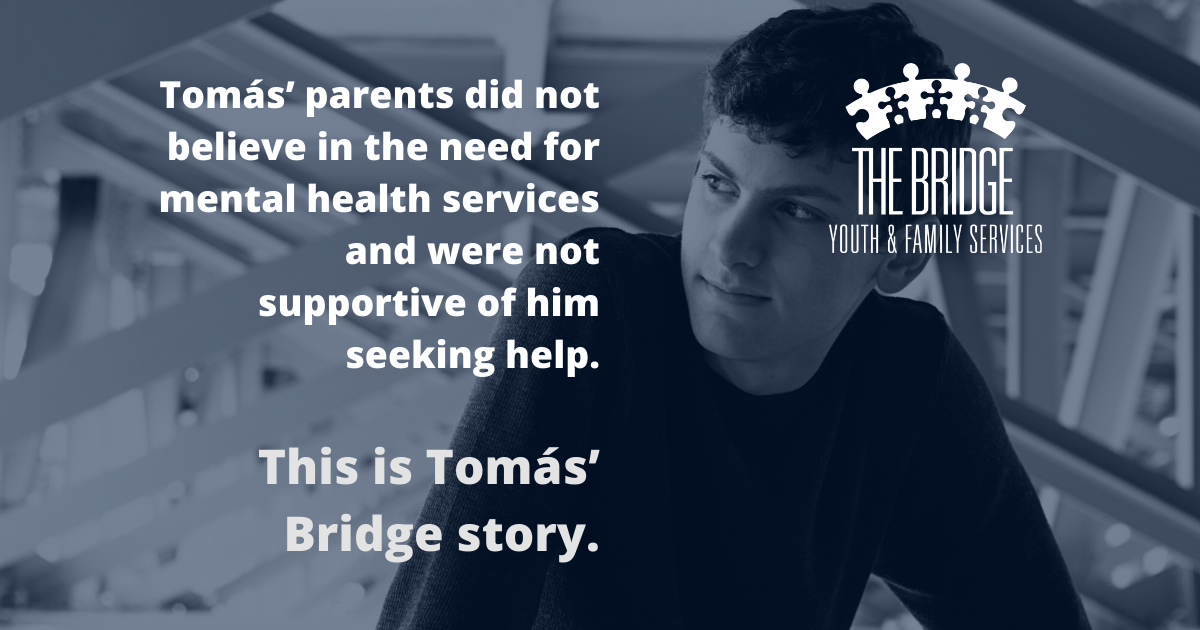 Meet Tómas. An 18-year-old high school senior who was dealing with a large amount of stress in his life. Not only was he busy studying for his AP exams and applying to college, he was actively seeking asylum after he and his family fled their home country due to government corruption and the lack of political and religious freedoms.

With the stress his family was experiencing, Tomás was depressed and anxious and began having suicidal thoughts. He sought help from his school social worker who called The Bridge’s crisis intervention team for assistance. The Bridge crisis counselor went to the school and performed a suicide evaluation to determine if Tomás needed to be hospitalized. Upon establishing that Tomás was not a risk to himself, The Bridge crisis counselor recommended that Tomás start counseling at The Bridge.

Tomás’ parents did not believe in the need for mental health services and were not supportive of him seeking therapy. They also did not have a way of transporting Tomás to The Bridge to receive counseling services. Fortunately, The Bridge was able to provide transportation for Tomás via our transportation voucher program, which provides taxi services with funds from the McCormack Foundation for clients who struggle to provide transportation to travel to and from therapy. Tomás was also able to access therapy with our sliding pay scale to cover his counseling sessions. Without this, he would not have been able to receive essential mental health care services.

Tómas never missed a counseling session. He was prompt and always willing to work with his Bridge therapist. During one of his sessions, Tómas shared that he was actively contemplating suicide. His Bridge therapist tried to call reach a family member in the hopes they would drive Tómas to the hospital. Unfortunately, no one answered and with approval from their supervisor, his Bridge therapist drove Tómas to the hospital so that he could receive the care he needed. His therapist waited at the hospital until he was seen and continued to calli his family in an attempt to get ahold of someone. Eventually, his therapist spoke to Tómas’ sibling and the family came to the hospital. During this time, Tómas’ parents realized the importance of mental health and were more supportive of him receiving these services moving forward.

When Tómas was released from the hospital, he continued his counseling sessions at The Bridge until he graduated and went off to college. His symptoms improved with every session and his therapist was beginning to see positive improvements and noted that he was beginning to thrive. Tómas passed his AP exams and received a full ride scholarship. Best of all, Tómas and his family were successfully granted asylum, which provided them stability and safety. It also gave him the opportunity to be able to provide for himself while at school. Tómas’ Bridge therapist was with him every step of the way and set up counseling sessions through his college so he could continue to receive mental health services.

Although Tómas had multiple obstacles to overcome, The Bridge empowered him to advocate for himself to be successful in the next chapter of his life.