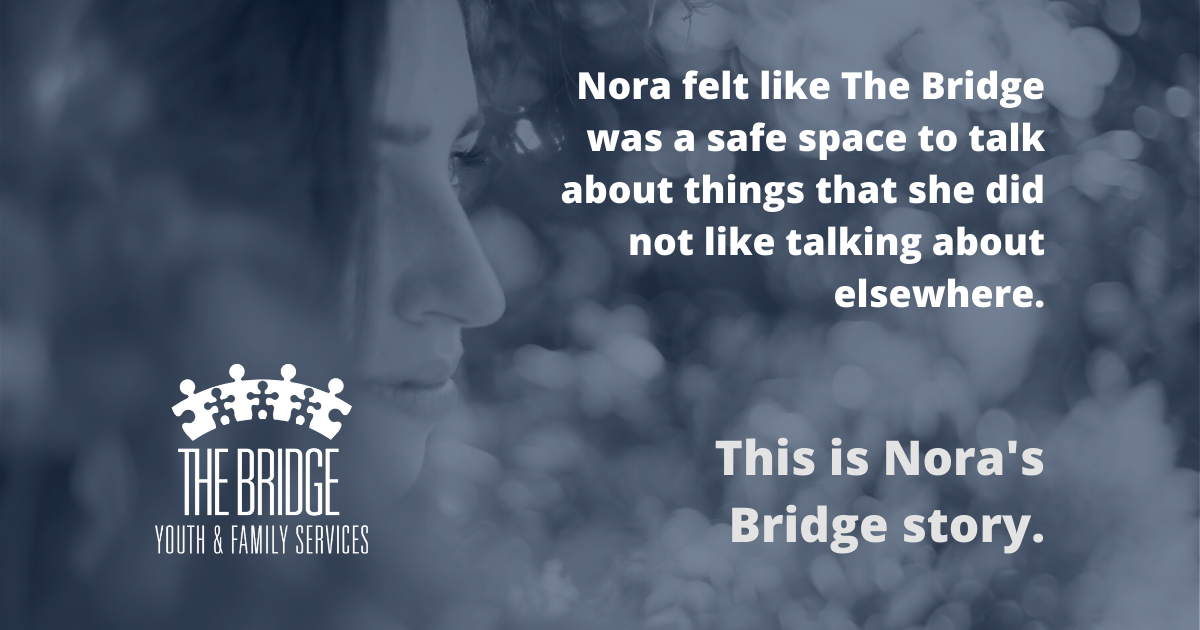 Nora is 15-years-old and of Hispanic descent; she has always felt different and has dealt with anxiety and stress. After receiving a recommendation from her school social worker to talk to a therapist, Nora’s mom brought her to The Bridge Youth and Family Services.

During the initial intake process, Nora’s Bridge therapist asked her what pronouns she used. When Nora expressed that she was unsure of what pronouns were, her therapist explained that stating your pronouns (such as he/him/his, they/them/theirs, and she/her/hers) is a way to self-identify your gender because you can’t be sure of someone else’s gender just by looking at them. This conversation made Nora feel like The Bridge was a safe space to talk about things that she did not like talking about elsewhere. She began to discuss how she feels sad for no apparent reason and mentioned that sometimes she bites her nails and hair when she is feeling really anxious–even sometimes when she doesn’t feel anxious. In general, she does not often feel calm.

Nora also shared with her therapist that she had been experiencing suicidal thoughts. Her therapist asked her more questions about what she meant and told Nora and her mom that she needed to be in a higher level of care where she can quickly learn how to reduce the threat of self-harm. Her mother had Nora admitted to a hospital where she could learn how to successfully manage her stress and anxiety. While Nora was in the hospital, her Bridge therapist spoke to Nora’s mom regularly and stayed well-informed on how they were both doing. Nora’s mom appreciated the check-in calls and inquired about how to ask her daughter questions, without sounding too critical.

When Nora returned from the hospital, her Bridge therapist asked about her overall experience: what she enjoyed, what she didn’t, and what had helped her. Nora had more to say about what she didn’t like and shared how some people said things that made her feel guilty or that they were talking about her behind her back. The Bridge therapist called these, “cognitive distortions,” or thoughts that become a pattern over time that do not have a basis in what is actually happening. The Bridge therapist began working with Nora to put things into a different perspective by asking Nora, “How do you know they were talking about you?” Or, “Let’s take that thought and rephrase it.” During this exercise, Nora came to learn and accept that she has many cognitive distortions.

During her sessions, Nora also began to discuss with her therapist that she identifies as bisexual–something that she had never thought she would admit to anyone. The therapist and Nora also had a conversation about the differences between sexual orientation and gender identity. Nora said she still identifies with the pronouns assigned at birth (she/her/hers), but she has a lot left to explore with regard to gender identity. Knowing this, Nora is working on becoming more confident in her ability to look inward and accepting herself.

Today, Nora is continuing to learn and grow by working with her Bridge therapist in this ongoing case.