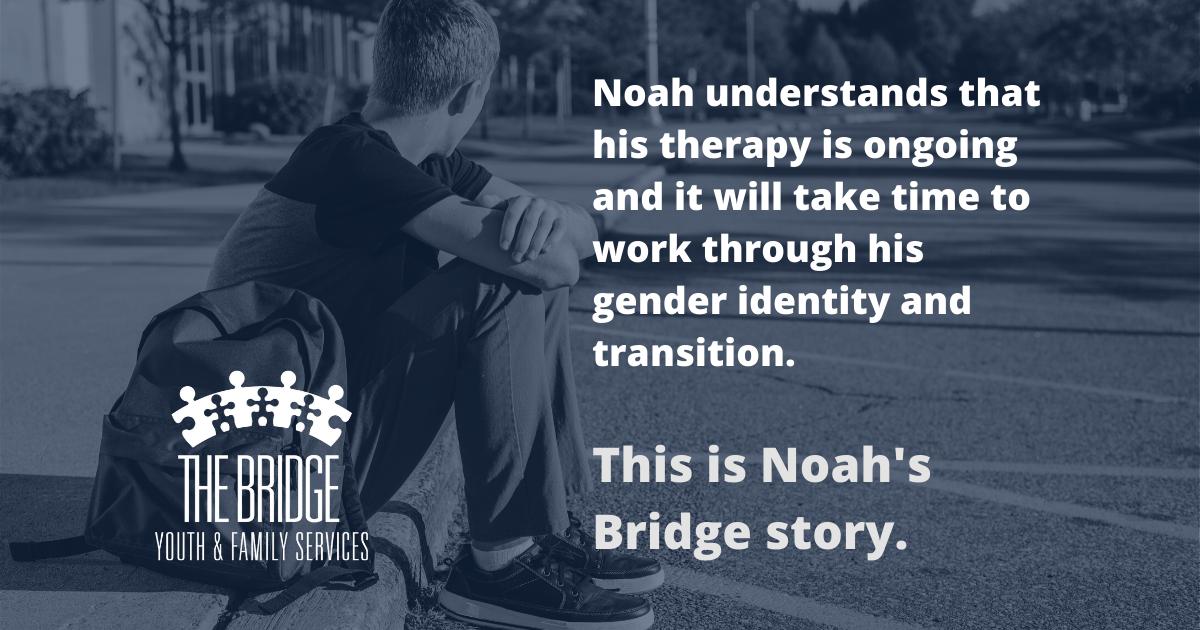 Misunderstandings about transgender children and their needs mean that many still don’t get the support they deserve, and the consequences can be tragic. Noah recently came to the attention of a Crisis Counselor at The Bridge during a Signs of Suicide Prevention Program (SOS). SOS is a universal, school-based depression awareness and suicide prevention program designed for middle- and high-school students with the goal of decreasing suicide and suicide attempts, encouraging peers to advocate for others, and reducing the stigma of mental illness and treatment among teens, parents, and school staff.

Although assigned female at birth, by the time Noah was a pre-teen he knew he was a boy. While navigating this realization and coping with sometimes stressful family dynamics, he started experiencing symptoms of depression. He told his friends that he had been feeling sad, hopeless, and thinking about suicide for some time. His friends notified a Bridge Crisis Counselor during an SOS session. Knowing that suicide is the second leading cause of death among teenagers, the counselor jumped into action and referred Noah to the local hospital for evaluation.

The Bridge’s Crisis Counselor helped Noah’s parents understand the importance of intervention and admittance to the hospital at this critical time. The Bridge also offered counseling services for the entire family so they could better understand what Noah was going through and how they could aid in his treatment and transition.

During their first session, Noah and his family identified some goals they would work on during their sessions. They agreed to focus on their coping skills around the process of Noah’s transition in an effort to help Noah manage his depression.

Through this group effort, Noah has had a dramatic reduction in his stress and the blossoming happiness for him and his family indicates that intervention and counseling has been the right solution. Noah and his family understand that his therapy is ongoing and it will take time to successfully work together through his gender identity and transition, but now he can focus on learning and growing alongside his friends.