Thanks to Our Mentor: Pete 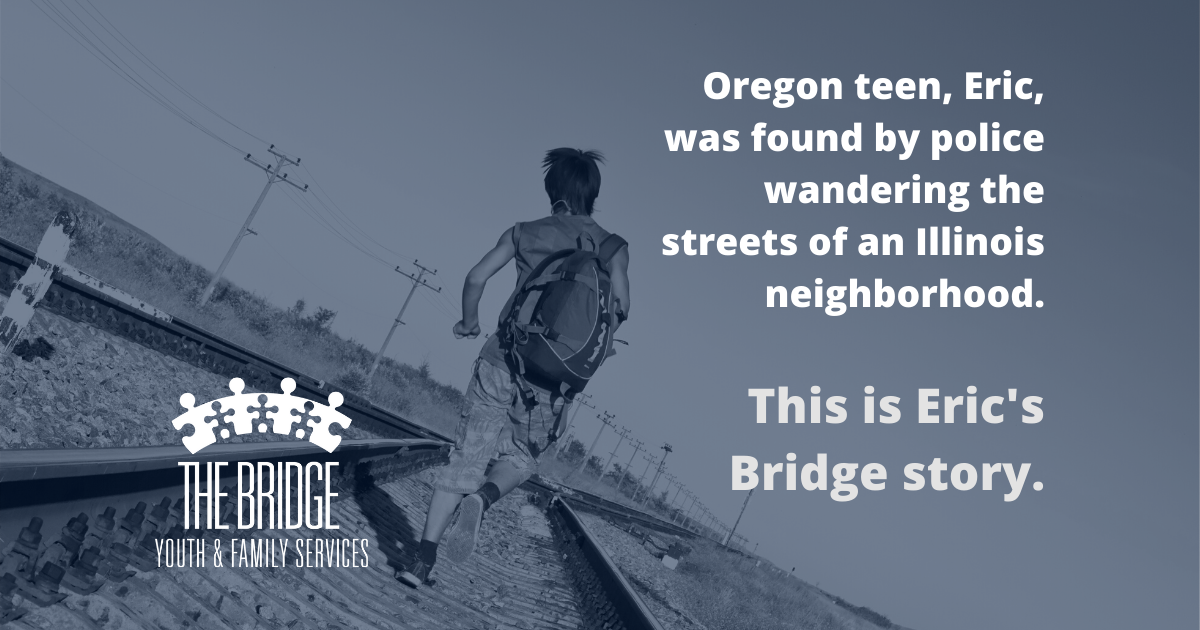 The Bridge Youth & Family Services’ crisis intervention team is on call 24 hours a day, 365 days a year. We are community partners with multiple schools, police departments, and hospitals in Northwest suburban Cook County and are called in to assist with runaway, suicidal, or at-risk youth. On one such incident, The Bridge was called in to assist with an out-of-state runaway case. This is Eric’s Bridge story.

At the time of his involvement with The Bridge, Eric was a sixteen-year-old who lived in Oregon with his parents. Similar to many adolescents, he enjoyed playing online video games that allowed him to connect and interact with people from around the country. Having connected with another teenager in Illinois online, they hit it off and began “dating.” He saved up money and bought a plane ticket to meet her in person without informing his parents. When he arrived in Illinois, his girlfriend picked him up using a rideshare app and hid him at her house. It didn’t take long for her mom to discover Eric and immediately contacted the police. Considered an out-of-state runaway, the police department contacted The Bridge’s crisis intervention team. Our staff immediately became involved and was in constant communication with various Oregon and fellow Illinois agencies for assistance in handling this complex situation. They also made sure to be in touch with Eric’s parents and reassured them that he would be safely returned home.

Because he was from another state, our crisis team engaged the national interstate compact process to facilitate returning Eric to Oregon. This process requires the child to appear before a judge to receive clearance to go home. Our crisis team worked with an attorney at the Cook County courthouse in order to set this date up and to transport him to and from the courthouse. During this hearing, Eric proved that he was willing to go back and that he did not run away out of fear or danger to himself. The judge approved his return home and Eric was sent back to his family in Oregon.

However, Eric’s case was far from over. The Bridge was contacted again a few months later when Eric was found by police wandering the streets of the same neighborhood in Illinois. Once again, he had purchased a plane ticket to visit his girlfriend without permission or knowledge from either of their parents. For a second time, The Bridge provided him with placement at one of the shelters we partner with and began the process of returning him home.

In both instances that The Bridge worked with Eric, our crisis team contacted Oregon child protective services to ensure that Eric’s parents had never been charged with endangerment and that he would be returned to a safe environment. Our counselors also spoke with Eric extensively about his relationship with his mother while also communicating with her about Eric’s behavior at home.

While discussing a plan with Eric, a focus was placed on receiving counseling in Oregon upon his return. There was also an emphasis on developing a safety plan with his parents to encourage Eric to share with them when he was beginning to feel triggered to run away.

In the end, Eric returned home again and the plans that had been created in Illinois by our crisis team were implemented in Oregon.