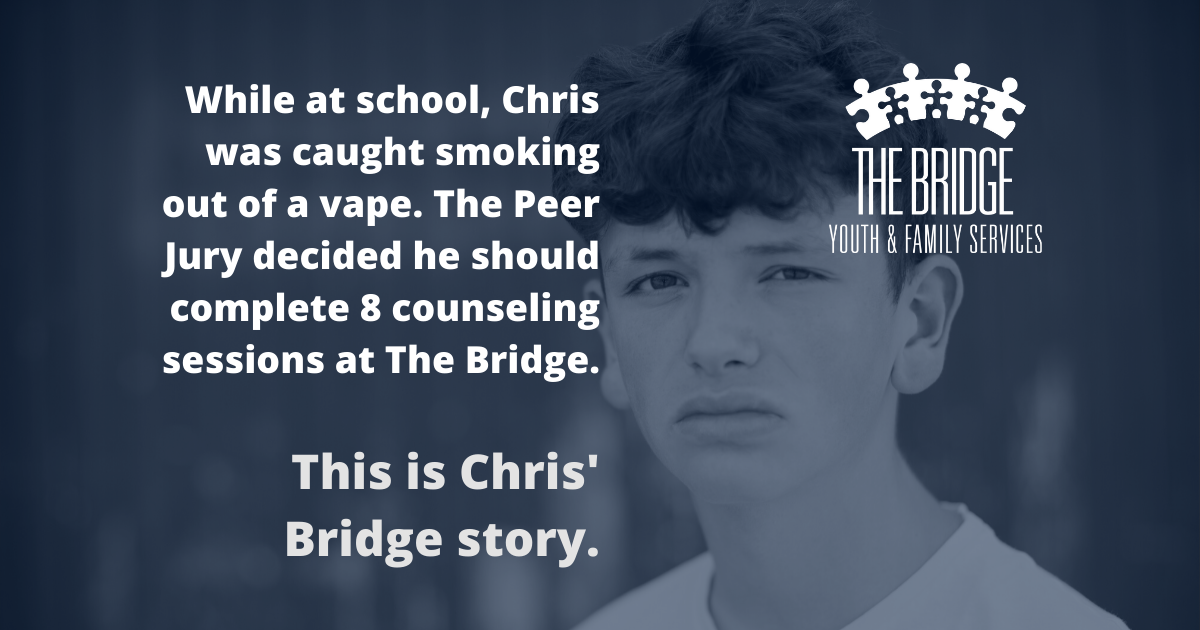 The Bridge Youth & Family Services has been involved with the Palatine Peer Jury program for numerous years. This court diversion program is for adolescents in Palatine who are non-violent first-time youth offenders. The jury is made up of adult moderators and trained youth jurors, who are high school students that have volunteered and undergone interviews, a screening process, and are responsible for collaborating on a sentence for the youth offender. Oftentimes, the sentence will include counseling services at The Bridge. During the sentencing process, the peer jury will consult with one of The Bridge therapists who recommends how many counseling sessions would be beneficial to the individual. These sessions, which come at no cost to the individual, must be completed in order to fulfill their sentencing. Once they are complete, they may choose to continue their sessions at The Bridge for ninety days. Additional sentencing for the individual may involve community services, attending educational workshops, issuing an apology letter, and writing an essay to better understand what outcome their actions have caused. This program serves as an opportunity for young people to learn from their mistakes and avoid becoming involved with the juvenile justice system. Below is a client story of an adolescent who was involved in this program.

Chris is a teenager who had a history of poor decision making. Having recently moved to a new school, he was struggling to fit in with the other kids in his grade. At home, Chris was quiet and kept to himself. He had a history of severe trauma, but wasn’t ready to share this with others.

While at school, Chris was caught smoking out of a vape in the bathroom. After admitting to his wrong-doing upon being caught, he was brought before the Palatine Peer Jury. During the hearing, Chris’ mom was visibly shocked stating that she had never seen him do anything like this before. After the jury decided that there may be more going on than Chris was sharing, he was sentenced to eight counseling sessions at The Bridge.

Chris used his time at The Bridge wisely and always made the most of the sessions. He began opening up about his past and detailed how moving while in middle school had deeply affected him and caused him to feel like an outsider. In addition to being attentive, Chris was willing to work through things he had undergone. He also put in the time to build positive coping skills while learning better ways to handle his emotions. This was seen at school, where he made an effort to get involved with extracurricular student groups. Upon completion of his eight sessions, Chris chose to continue with his counseling for the full ninety days. Had it not been for the Palatine Peer Jury, Chris may have never learned the skills he did and opened up about what he needed help with.